Session 4: Here were the choices:

And here was definitely my first big mistake of the meeting. I went to the one on Ocean Exploration — even though I had sworn to not go to things I knew a lot about unless I felt like I had to go. Here I did not have to go. But I went and though I am sure others in there found it very interesting, it was mostly stuff I knew a lot about (I have on and off done studies of microbial diversity in the oceans and deep sea). I guess the one highlight for me was discovery of Earthbrowser.

Session 5: Here were the choices (which I pulled from the Scifoo web site – but one was left off – we had planned a session for the second half on Terraforming).

Session 6: Here the choices were: 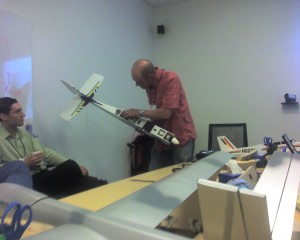 Session 7. Here the choices were:

Then we had another googlelicious dinner. I cannot for the life of me remember what I did but I guess that is OK.

And finally we had the last session. The choices here were:

And here I went to Greg Baer’s session on Biohacking. It was quite interesting with a wi

And thus ended the sessions. We had a reception and then at around midnight people went back to the hotel and some continued to linger for many hours … I only lasted til ~ 1 am.

Blue grosbeak in #DavisCA #BirdPhotography
Summer in #DavisCA #sunflowers #california
Well, my wife is away - and despite my Bayesian priors on this - I am not the worst temp stay at home dad
Great tailed grackle.
Swainson's hawk. Being regal. Davis, CA.
Jam delivered to my mom for her birthday - plum, nectarine and apricot
Great blue heron at @ucdavis Monday (near MRAK Hall). #birdphotography #NaturePhotography #ucdavis
Follow up with higher resolution / cleaned up / additional pics of the dragon seen at @ucdavis