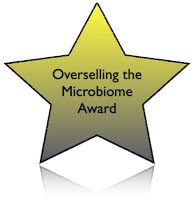 At the recent “Future of Genomic Medicine” meeting, George Church gave me some grief over my “Overselling the microbiome award” because he thinks (rightly) that some people also undersell the microbiome.

So I set out today to find an example to give out such an award.  And within seconds I bumped into this: Germs: There are bugs that cure infections, protect against stroke and even keep your skin clear | Mail Online in the Daily Mail.

Wow.  And not in a good way.  Oh well, so much for the underselling award.  Just the title made me cringe.  And so so so so many of the details are so so bad.

Where to start.  I guess from the beginning.

“.The secret lies in the balance of the bugs, which exist in a fragile ecosystem. Knock one out and the system goes haywire.”

“Imbalances in gut bacteria, for instance, have been linked with diabetes, obesity, autism, eczema, psoriasis, asthma and inflammatory bowel conditions such ulcerative colitis and Crohn’s disease”

Holy crap.  That sounds awesome.  Except that there are all correlations so far with no known causative role at least in humans.

Then they list some of the other good things microbes apparently have been proven to do:

“ANXIETY-BUSTING GUT BACTERIA”
“It seems that the type of bugs you have in your body can affect mood.”

Though at least in this section they do refer to a mouse study but clearly imply this is true in humans too.  It may be.  But I am unaware of any studies proving it.

“BUGS ARE GOOD FOR YOUR SKIN”
“It’s a common misconception that the cleaner the skin, the better — and the bacteria that live on our skin have an important role.”

I am all for not killing all microbes willy nilly but their is certainly one part of the body that you probably do want to wash a lot – your hands.  So As long as they don’t say “Don’t wash your hands” this could be OK.

So what do they say next:

‘If you wash your hands repeatedly, they dry out — this is partly because you wash away all the oils but also because you remove a large number of the bacteria that help maintain the skin’s condition,’ says Professor Mark Fielder, a medical microbiologist at Kingston University.

Oh FFS now they are basically telling people to not wash their hands.

“SHARE A KISS… AND BACTERIA”
‘Every time you kiss, for example, you exchange a million bacteria. ‘So your gut microbiology becomes close to that of your loved ones.’

Sounds great.  I could not find any references on the topic but sounds great.

“SOME TYPES MAY PREVENT STROKE”
Wherein the tell a story based on a press release which had led me to post the following: “Award: Ridiculous, absurd, offensive overselling of the microbiome from Chalmers & Gothenburg”.  Any idea if I think this is an accurate press release?

TRANSFUSION TO BEAT INFECTIONS
Wherein they discuss fecal transplants for C. difficile infections, which seem to work quite well and I have written about a lot (e.g. Transfaunation and Fecal Transplants: What Goes Around Comes Around, Literally and Figuratively).  But then they kill their positive mojo on the topic by writing:

Lawrence Brandt, a professor of medicine and surgery at New York’s Albert Einstein College of Medicine, believes the treatment could work for other, non-gastro conditions, such as obesity and Parkinson’s.

And it goes on and on including:
“SOME BACTERIA KEEP YOU SLIM”
“BUGS THAT HELP MEDICINE WORK”
“COULD THEY WARD OFF CANCER?”
“KEY TO BABIES’ IMMUNITY”

I mean – I really really do think the microbiome plays roles in many many parts of our lives.  But those who promote it this much are the snake oil sellers of the modern era.  A slight of hand here and soon they will be selling us some specific brand of probiotic or way to protect our microbiomes.  So for this article the Daily Mail is getting my first multiple “Overselling the microbiome award.”  They could get 3 or 4 just from this article if not more.  But I will just give them two.  And I will keep searching for an underselling the microbiome recipient.

One thought on “First multiple "Overselling the microbiome award": the Daily Mail article on Germs”