So I got this email a few weeks ago inviting me to the White House. 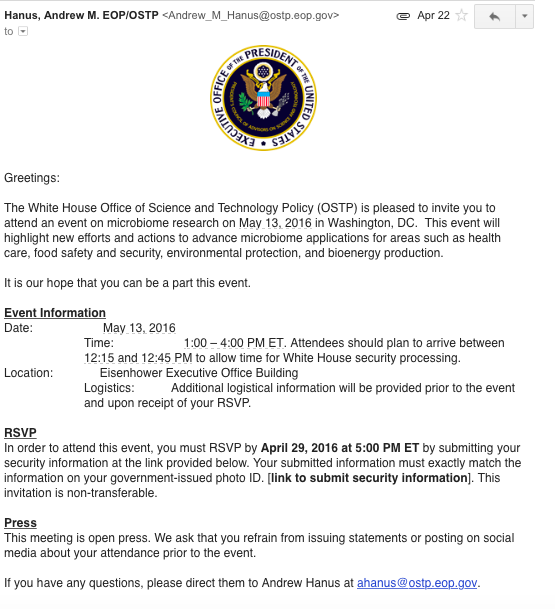 Not every day that I get invited to the White House.  And I thought I was probably on their shit list after removing my name from the “Unified Microbiome Initiative” paper due to it being non open access.  So I asked a colleague if she could teach in my large introductory biology class for me on May 13 and she said yes.  So I RSVP to the meeting and told my mom I would be coming to the DC area (where I grew up).  And I told everyone, proudly “I am going to the White House”.

I realized I had a tight schedule for flying in and out since I had to be back in Davis Saturday AM.  So I wrote to the White House to ask about the schedule for the event.  You see, I had no information as to what this event was going to be about.

And, they did tell me this would work although they would not tell me what the meeting was about.

I then bought my tickets and got excited to be going to the White House.  However, fate would not be so kind to me.  My daughter got sick last week (bronchitis, and multiple spin off issues) and so I started to wonder if I really should go away.  So I tried to find out what was happening at this event.  I wrote a few friends who I knew were going and one of them told me there would be a series of talks and another told me they did not know.  So – without much other information to go on, and with a strong desire to take care of my daughter as much as possible, I cancelled my trip.

Then yesterday I got an email from a NY Times reporter

And so we connected and talked for a bit.  I found out from the phone call that the White House was announcing their Microbiome Initiative (which I knew was in the works but for which I basically knew no details).  The reporter Gardiner Harris asked me how I felt about “Big Science” types of projects and, well, I did not say nice things about them.  And I stand by those critiques of Big Science.  I talked about how I disliked the Human Microbiome Project in many ways because it fed too much money to a few groups and was prone to the same problems of other Big Science projects.  And that they were generally a waste of money.  We also discussed how I thought science worked better when administrators got out of the way and let peer review have more of a role in determining what was important.  And I said that if the new White House initiative was another top down science effort, then this would likely be a bad thing.  Or something like that.  But I did also say that I had no idea what the White House was going to announce about and I hoped it was more supportive of small science.

So the article came out and I was featured in it

Definitely something I stand by.  I think top-down approaches to science do not work well.

I woke up early this AM and started posting about the evils of Big Science.  And then I finally found an announcement with actual details on the National Microbiome Initiative being announced today.  And I was pleasantly surprised.  This was not about a big, top down approach to science.  It was more about a collection of projects under one big umbrella theme of microbiome studies.

And I found one article out there about the project that captured this essence of it:  The White House Launches the National Microbiome Initiative  by Ed Yong in the Atlantic. He nails it with this section

The National Microbiome Initiative is not the Human Genome Project—a single project with a definitive goal. It consists of many organizations operating independently; to paraphrase Whitman, it contains multitudes.

So my quote in the NY Times was technically correct – Big Science is bad.  But it also not quite right in the context it is presented – since the NMI is actually not really (or at least not completely) Big Science.  I do wish the context of the quote had been presented a bit more  (well, more specifically that I did say I did not know the full details of what they were actually proposing).  Lesson learned.  Be really careful about commenting about things “generally” without knowing the details.  I definitely regret doing that here.  I did in fact say what is reported so can’t complain about being misquoted.  But I should have been more careful regarding the caveats and context.

I note – it is unclear to me how much of these smaller distributed projects would have happened without the NMI.  My guess is most of them would have happened and that the NMI is a bit of a public relations effort.  Ed Yong also captured this issue in his piece:

A cynic might be forgiven for seeing this as an exercise in branding, encapsulating what microbiome scientists were already doing under a catchy umbrella.

And I also worry as always that “Microbiomania” (hype about the microbiome) will get worse with this announcement of the NMI.  And it probably will.