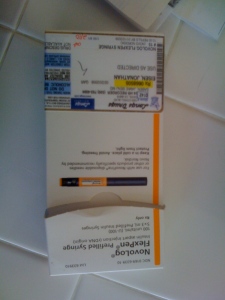 All I can say is I am glad I check my medicines before I take them.  I went to Long’s in East Davis the other day to pick up some insulin and was given a box of my insulin pens.  When I got home I found that there was only one insulin pen in the box and that pen was used.  Not exactly confidence boosting in my pharmacy.  Only later did I figure out what happened which was even scarier.  This was insulin I had returned months before because of a defect that Long’s was supposed to send back to the manufacturer (I had called the company who had handled this very well, and they told me a free box would be at Long’s and that Long’s would return the unused portion to them).  So I guess Long’s put it in the fridge and did not return it and then saw my name on it and gave it back to me.  Yuck.  Even worse, they did it again, I think the next time I went in.  Double yuck.

Note that I wrote this when it happened but decided not to post it (but saved it in my blogger account), since it seemed a bit too personal. But now (2009) I am having problems with Long’s again and I figured I would make live some of my old postings about Long’s.