Well without a doubt the biggest surprise to me of the American Society for Microbiology General Meeting was the massive increase in the use of Twitter compared to previous years.  Microbiologist are clearly just way way ahead of the curve compared to other scientists on this.  The tweets and retweets and discussion of tweets was so extensive that #ASM2012 was a trending topic on twitter for much of the time during the meeting: 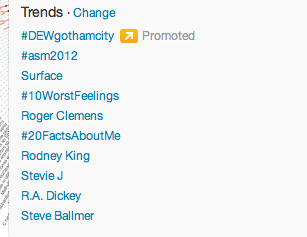 For those not familiar with Twitter – this abbreviation w/ the # is known as a hashtag – and if everyone at a meeting uses this hashtag in their posts about the meeting then it is easy to keep track of all the meeting posts by searching for posts with that hashtag.  Such searches can be done in real time with various Twitter clients or via the Twitter website.

And if you followed in real time the #ASM2012 you were treated to a broad real-time coverage of pretty much the whole meeting.  At most broadly focused science meetings I have been at recently – even ones with 1000s of people like #AAAS – the use of Twitter has been relatively limited at best.  Sometimes a single session is covered well but very rarely is the whole meeting covered.  So this ASM meeting was indeed different.

I tried to create a “Storification” of all the Tweets from the meeting but Storify seems to crash when one includes so many tweets so that did not work.

So I tried to create my own archive via Twitter – by copying and pasting the posts from each day (some got left out here but it is decent coverage).   It is not as pretty as Storification but it works.  Still working on a full archive but Twitter makes it kind of difficult to do alas.

One thing missing however was the use of microbiology related hashtags for topics.  Seems we really need to get some coordination here to make it easier to search through and find tweets of interest.  Here are some I have used in the past and may be worth using if you want more people to notice your tweets.

Anyway – keep up the good work all you microbe-focused tweeters.  And though microblogging (i.e., Twitter and related things) is great – don’t forget to blog too.  See my growing list of microbiology related blogs and please add to it – either if you know of ones I missed – or by creating your own.

Cat. Fire. Happy.
Went shopping with my daughter in Old Sacramento and got some new glasses for Zoom calls
Good morning @ucdavis Putah Creek Riparian Preserve
Hummingbird in my yard today in #davisca
Coyote at River Bend Park in Sacramento this PM
There is something about hummingbirds with their eyes closed that captivates me. Taken today at @ucdavis campus near/in the arboretum.
Ravens at #yolobypass
Green heron at #yolobypass