Renowned parapsychologists Venkman, Stantz, Spengler and Zeddemore recently sat down with us to talk about their reactions to the newly released pre-print, “Ghost-tree: creating hybrid-gene phylogenetic trees for diversity analyses”.

“Initially we were really intrigued,” said Dr. Venkman,  “We thought that finally someone had paid attention to what our field really needed!”

However, it quickly became apparent to the parapsychologists that the paper wasn’t what it seemed.

“The farther I got in the paper, the more it became apparent that the authors had no real grasp of apparitional experiences and the science involved in studying them,” said Dr. Spengler, “It was as if the authors were from a field that was antithesis to the field of parapsychology.”

I asked Dr. Spengler if he was familiar with the field of mycology.

“Mycology… Never heard of it.”

At this point in the interview, I was increasingly curious as to what exactly the parapsychologists thought was wrong with the paper.

“Well, you see, it is lacking… in ghosts,” explained Dr. Stantz, “In fact, there are no ghosts in the entire paper! It is very misleading!”

I thought about pointing out that the word “ghost” actually appears several times in the pre-print (at least seventeen), but decided against it. Parapsychologists can be a little scary when they get worked up about a topic.

In fact, they got so worked up over the Ghost-tree paper that they decided to write their own paper titled, “The REAL Ghost-tree: a hybrid-media phylogenetic tree for diversity analyses in apparitional science”. 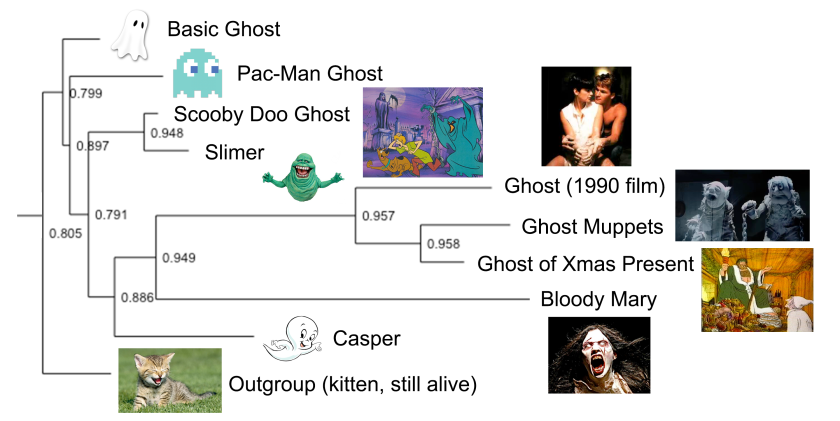 “In a way, that terrible Ghost-tree paper was actually a good thing for the field of apparational science,” said Dr. Venkman, “Now parapsychologists and citizen scientists everywhere can put their apparitional experiences into an evolutionary context.”

When asked if they had any comments that they would like related to the Ghost-tree authors, Dr. Zeddemore had the following to say,

“Next time, actually include ghosts.”

2 thoughts on “The REAL Ghost-tree”