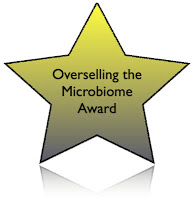 Well, this is a combination of horrendous, frustrating and painful: Discovery of Microbiome “Third Brain” Confirmed by Scientific Research in Japan | Business Wire. This is a press release that focused on Peter Greenlaw and Marco Ruggiero so I assume it came from him.

It starts off discussing a new paper from

which according to the PR:

“describes the properties of a food product that is reminiscent of the “super food for the third brain.”

Note – no link is provided to the paper.  Not surprisingly, the PR then transitions to being something else – in this case a new book by Greenlaw:

“this finding supports the discoveries revealed in the book “Your Third Brain,” co-authored by Peter Greenlaw, Dr. Marco Ruggiero and Drew Greenlaw, with the forward written by author John Gray, Ph.D.”

So this is not really about the new paper – this is a kind of bait and switch. Then comes one of the doozies “

Four and a half years ago, a huge discovery was made. In 2010, a team of researchers discovered a new organ that had gone undetected for more than 3,000 years in Human Anatomy. They called this newly discovered organ the microbiome.

What?  The human microbiome was discovered four and a half years ago?  That is of course complete BS.  I note – there is something a tad bit off here with the “3000 years too”.  Is this a religious reference of some kind?
Then comes another amazing section.  Underlining by me

The microbiome is much more than the gut microflora. It is a complex organ that is responsible for the development and function of all the other organs and systems, from the brain inside our heads to the immune system. The influence of the microbiome, that is located all over our body and not only inside the gut, on our behavior and intellectual functions is so significant that it can be aptly named “the third brain” as it is described in the book.

Wow.  I mean sure there is some evidence that the human microbiome can impact the brain.  But first of all, it is ridiculous to consider it “the third brain”.  Also, to say it is responsible for the development of the rest of the body is just plain silly.

How about this next section?

Dr. Ruggiero’s team is working hand in hand with the complete cooperation and unprecedented collaboration of medical doctors, with the goal of extending the highest possible quality of life for their patients for as long as possible. And although Dr. Ruggiero did not personally discover the microbiome, he did identify it as the third brain.

OK – so is this meant to imply other people don’t collaborate with medical doctors?  And other people do try to extend quality of life for parients?
So many other bad sections I am not sure which other ones to point out.  How about this:

Before this book was written, man did not know that his thoughts, feeling, emotions, behaviors, his supposed free will were under the control of a non-human organ whose existence had gone undetected until very recently, the microbiome.

This sounds like the voice over you might have in a science fiction horror movie.  Except – this is real fiction and from a horror show of a press release.
I must say – Greenlaw and Ruggiero are clearly very proud of themselves.  I will just leave everyone with the last paragraph for people to ponder how humble and understated it is.

This book describes what is and how we can take control of this non-human third brain and aspire to bring out the superman that is inside us. As the Philosopher wrote: ‘Let your will say: the overman shall be the meaning of the earth… Man is a rope, tied between beast and overman—a rope over an abyss … what is great in man is that he is a bridge and not an end.’ Thanks to the information contained in this book, for the very first time in the history of mankind we can transform ourselves and reach this end

I am hereby awarding Greenlaw and Ruggiero an “Overselling the Microbiome” award.  But that seems too small for them.  They deserve some sort of “Biggest pile of BS ever” award.  I will consider starting such a new award series in their honor.

6 thoughts on “Possibly the worst press release on the microbiome ever: Greenlaw and Ruggiero and the third brain.”

Panorama from the top of Gothic Mountain in Colorado. Took a series of pics in 1988 from the peak and only today stitched them together into this.
Coyote in rural #DavisCA this PM
So cool to see this in hard copy - congrats and great job @lonna_wright
Red tailed hawk this PM in Woodland, CA
Me, my older brother and sister - 1984 - Alaska
Sunset over the SF Bay seen from Amtrak …
Dryobates woodpecker in my yard a few days ago in #davisca
Coyote checking out flooded areas near #YoloBypass yesterday