Skip to content
We are nearing the end of our Kitty Kickstarter to fund research on the microbiome of cats (only three days left).  We have received some requests to learn more about our work with animal shelters. Here is a blog post by Alex Martin, a UC Berkeley junior who is working with us to study shelter cats in Berkeley.

The Berkeley Animal Shelter takes in all cats from within Berkeley city limits. Thus, cats who once varied markedly with regards to diet and home environment come to live under a fairly uniform set of conditions. It typically houses between fifteen and forty cats, but has held as many as seventy during the peak of breeding season. Recently we have begun collecting samples from cats at the Berkeley shelter in order to better understand their gut microbiomes.

A major dichotomy in the shelter cat population is the one separating house cats from feral cats. Both are considered domestic cats, members of the species Felis catus. If a kitten during its first few months of life is not exposed to humans, it develops behaviors to facilitate surviving in the wild, and grows up to become a feral cat. Some see feral cats as a nuisance, but the animals also tend to live difficult lives, enduring food shortages and a lack of medical care. Thus, a relatively new effort referred to as “trap-neuter-return”(TNR) aims to spay and neuter feral cats to slowly and humanely diminish the size and number of feral cat colonies. Differences in the gut microbiomes of feral cats versus their tamer counterparts is perhaps expected, as the two groups have vastly different diets and levels of environmental exposure. However, these differences have yet to be characterized.
In addition to the differences between feral and house cats, a small but important FIV(Feline Immunodeficiency Virus) population can potentially serve as an interesting point of comparison. Much like Human Immunodeficiency Virus, FIV attacks the immune system of infected individuals, making them markedly more susceptible to other infections. We think that this virus will affect the microbiome of FIV-positive cats in measurable ways. By identifying any differences, we will gain a better understanding of FIV as a whole and will hopefully be better positioned to one day develop more effective methods of treatment.

Geronimo is one Berkeley shelter cat whose gut microbiome will be analyzed. He was picked up as a stray just a few blocks from the shelter, and is three years old. Geronimo is exceptionally friendly, and loves playing with his wand toy and hiding in his cat tree to nap. He gets along well with other cats and was even introduced to a rabbit without incident. After spending about two weeks in the shelter, Geronimo was adopted into a loving home.
——–
This is from the “Tree of Life Blog”
of Jonathan Eisen, an evolutionary biologist and Open Access advocate
at the University of California, Davis. For short updates, follow me on Twitter.

The Story Behind the Launch of the Kittybiome Cat Microbiome Project

https://www.kickstarter.com/projects/catbiome/kittybiome-kitty-microbiomes-for-cat-health-and-bi/widget/video.html
Recently a group of us launched a Kitty Kickstarter campaign where we offer to sequence the bacteria in your cat’s gut microbiome as part of a long term research project to learn more about how microbes may affect cat health, behavior and evolutionary history (and vice-versa). Jonathan has written about the origins story here. This project complements our interests in the microbiology of animal shelters and the evolution of bacterial communities in the Felidae. In addition, we thought that other people like cats too and might be interested in learning more about the hidden life of their cats. We have had an overwhelming response that vastly exceeded our expectations (and we are still welcoming more kitty “pawticipants”).

We have been asked “Why cats?” Personally I think it’s hard not to be fanatical about cats. The diversity of cats is astonishing and most people agree that cheetahs, leopards, lions and tigers are amazing. And when you see a lion in the wild for the first time, it’s hard not to see some of your house cat in there, in the way that it walks, naps, yawns, and even pounces (but not so much the roar). Also it’s really interesting that domestic cats have been associated with people for something like 10,000 years. Several years ago I decided to take what I learned from studying microbial ecology in soil (and how it might affect the transmission of anthrax in zebras) and apply it towards understanding the microbial ecology of the animals themselves. I believe that research in the microbiome of cats (and humans) will eventually lead to useful interventions.

In our kittybiome project, we aim to sequence the gut microbiome of 1,000 cats and by doing so begin to capture the variation in gut bacteria in different populations of cats (both domestic and wild). In domestic cats, we will compare cats living in houses with cats living in shelters and feral cats. We are starting to compare cats with different health conditions and have had some cats with diabetes and IBD join the project. This aspect of the project is really important because these conditions are fairly common and there is a lot of room for improvement in how cats suffering from IBD in particular are treated. 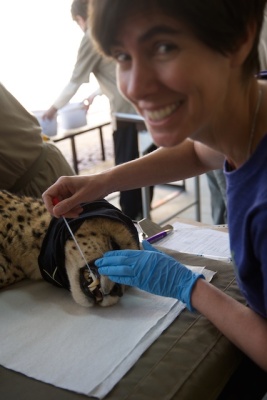 In addition to being fanatical about cats and passionate about poop, I am especially interested in how social behavior affects the composition and function of microbial communities in cats (in their poop and their anal glands!). (My life was changed by reading about hyena scent gland bacteria.) The evolution of the interaction between cats and their symbiotic scent gland bacteria fascinates me. In the Serengeti, residential territorial cheetahs have been observed scent marking on an hourly basis. Domestic cats are really interesting because feral cats form social colonies. The only other cats that are social are lions (who form prides) and cheetahs (who form coalitions). We are comparing these cats with some social structure with some of their close relatives who are solitary (black-footed cats, leopards, and pumas).