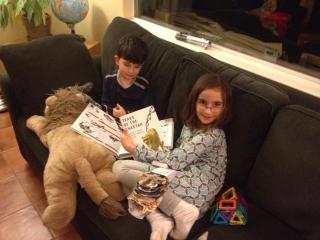 Stephen O’ Brien talked at UC Davis a few days ago. I met with him in the afternoon before his talk. It was one of the more interesting discussions I have had in a long time. He has done some very interesting and important work (e.g., comparative genomics, HIV, feline evolution) though most of what we talked about was not work per se (e.g., we talked a lot about baseball and big cats since my kids are obsessed with big cats).

Anyway, below is a “Storification” of tweets from his talk. Best part – he signed a copy of his Tears of the Cheetah: The Genetic Secrets of Our Animal Ancestors

book with a dedication to my kids.
//storify.com/phylogenomics/steven-j-o-brien-talk-at-ucdavis-on-ccr5-hiv-aids.js?template=slideshow[View the story “Steven J. O’ Brien talk at #UCDavis on CCR5/HIV/AIDS” on Storify] 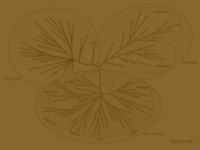 Well, if you can, for a minute, ignore that fact that in Discover Interview: Lynn Margulis Says She’s Not Controversial, She’s Right | Evolution | DISCOVER Magazine Discover Magazine in essence is promoting some of the refuted ideas Lynne Margulis has about HIV. Sure they hint in part that they think she is over the top but they also give her a soapbox to spout some of her latest absurdities on HIV and such. I would suggest you don’t even read the main part of the Discover article. Just read Tara Smith’s discussion of it: Margulis does it again : Aetiology. Margulis should not be given such prominence in a magazine like Discover. But that is not what I am hear to write about. I am hear to point out that Discover also sets up a red herring for Margulis. In the beginning of the article, it is written:

“A conversation with Lynn Margulis is an effective way to change the way you think about life. Not just your life. All life. Scientists today recognize five groups of life: bacteria, protoctists (amoebas, seaweed), fungi (yeast, mold, mushrooms), plants, and animals. Margulis, a self-described “evolutionist,” makes a convincing case that there are really just two groups, bacteria and everything else.”

Seriously? Scientists today do not recognize five groups. Scientists today have moved past that to recognize and/or argue about bacteria, archaea and eukaryotes – the three domains of life. These three groups were first proposed in 1977 by Carl Woese and colleagues. Did Discover somehow miss the last 34 years of science? WTF? For setting up such an evolutionary red herring in this painful interview with Lynne Margulis, I am giving Discover Mag my coveted “Twisted tree of life award“. Past winners are:
——–
This is from the “Tree of Life Blog”
of Jonathan Eisen, an evolutionary biologist and Open Access advocate
at the University of California, Davis. For short updates, follow me on Twitter.