This is just fucking ridiculous.  As I have written about many many times – Nature Publishing Group many years ago promised to make papers reporting genome sequence data freely available.  They do not generally live up to this promise well.  See for example

Today I discovered that not only are some important genome papers not freely available but one for the ages – the paper on the HeLa genome – reported with much fanfare recently as a triumph of an agreement with the family of Henrietta Lacks – is only available if you pay.

Once again I call on Nature Publishing Group to publicly disclose all financial gains that have come from people paying for the these genome papers and for the money to be returned.
——–
This is from the “Tree of Life Blog”
of Jonathan Eisen, an evolutionary biologist and Open Access advocate
at the University of California, Davis. For short updates, follow me on Twitter.

Multiple people from NPG have posted on my blog and twitter that they are working on “fixing” these issues.  By which I think they mean “We will make these freely available again.”  But this is not a full fix.  NPG really needs to do a self audit and return ALL money that anyone has paid for access to these articles.  Charging for something that is supposed to be free is not a good thing … and if they want to really fix the issue they need to give any money they got for these papers back.  Note – I already called for them to do this last year when I wrote about the genome papers not being free.  But I never heard back.  Please help put the pressure on them to do the right thing this time.
——–
This is from the “Tree of Life Blog”
of Jonathan Eisen, an evolutionary biologist and Open Access advocate
at the University of California, Davis. For short updates, follow me on Twitter.

So – after finding out that “corrections” for freely available papers at Nature cost money to get access to I decided to snoop around at Nature Publishing Group’s archives to see how they have handled corrections.

If you search for “Corrections” in Nature Publishing Group’s journals, you see that many / most are labelled as “free” and in fact, they do seem to be free.  That is until about 5 years ago.  As far as I can tell, most “Corrections” published prior to September 2007 are not freely available.

For example see this correction where we are told

Tantalizing.  To find out more you need just pay $18.

Or in this correction:

Not so tantalizing.  But nevertheless the full correction can be yours for just $18.

The story ”That’s no laser, it’s a particle accelerator” (Nature 443, 256; 2006) incorrectly stated that the device described could accelerate electrons to 0.15% of their initial speed.

This is one of my favorites:

“A misleading statement appeared in the News and Views article “Cardiology: Solace for the broken-hearted?” by Christine L.”

“On page 875 of this Article, there are some typographical errors in the equations used in the computer model. The errors are in the third and fourth full paragraphs on this page.”

Some don’t even have any clues.  For example in this one we just know the problem is in an article on Transatlantic robot-assisted telesurgery.  Or in this one the issue is with ancient homes for hard-up hermit crabs.

“The next two paragraphs will require slight modifications accordingly; and the last will, of course, be unnecessary. I owe this correction to a correspondence with which Prof. W.”.  Alas, we can’t know the rest without – wait for it – without paying $32.

I think we should have a context.  Find the correction for which the free part is the most absurd or tantalizing.  I don’t know if other closed access journals do the same thing but it would be great to know …

UPDATE: Some more fun stuff from Nature.  There is a paper from Nature in 2005 “Making sure corrections don’t vanish online“.  It is, of course, available for just $18.

But I have discovered a just painful though funny absurdity with NPG’s money making machine.  They have in fact made the Lander et al. Human genome paper from 2001 freely available.  But there is an Erratum to this paper.  And if you want to get it (and without getting it there is no way to know what is being corrected), you have to pay $32: Access : erratum: Initial sequencing and analysis of the human genome : Nature.  Oh, and in addition a Correction “We have identified several items requiring correction or clarification in our paper on the sequencing of the human genome” for this paper also costs $32.  So the incorrect version of the paper is free but the corrections will cost you $64.

I wonder, for papers for which people pay $$, if there are corrections do they get them for free?

Well, tick tock tick tock.  I am still awaiting some explanation for Nature Publishing Group once again charging for access to genome papers that they promised would be available for free.  See my last post for more details: The Tree of Life: Hey Nature Publishing Group – When are you going to live up to your promises about “free” genome papers? #opengate #aaaaaarrgh

In the meantime I have come up with a solution even if NPG folks cannot figure one out.  It is very simple.  How about Nature Publishing just deposit’s all genome papers in Pubmed Central and thus even when the money making machine of Nature switches some setting and makes the papers not freely available at the Nature web site(s) for some time, the papers will  still be officially free in Pubmed Central.  I think this is probably the only solution I would trust given that this is at least the third time this has happened.

Well, I realize of course some things take time, but I cannot imagine it is that hard to restore free access to all papers reporting genome sequence data.  Nature had promised to do this when many papers were published but recently I noticed that this was not being done.  For some background see:

So today I browsed around to see if access had been restored to these genome papers.  And alas they had not for many. For example, the Plasmodium genome paper is not available 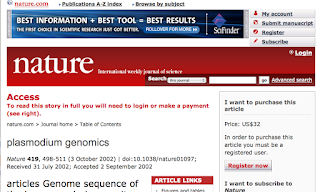 The Shewanella genome paper is also not available.  I know things take time.  But I note, I have pointed out failings in the free access previously to Nature and it was seemingly fixed but not permanently.  They really need to fix their system so that this stops happening.  So I am going to keep at them.  A bit tongue in cheek I have called this #opengate but perhaps I should call it Openomics?
——–
This is from the “Tree of Life Blog”
of Jonathan Eisen, an evolutionary biologist and Open Access advocate
at the University of California, Davis. For short updates, follow me on Twitter.